Shared, door-to-door, autonomous electric mobility with privacy will revolutionize the public transportation and replace a majority of private cars.

A substantial reduction of traffic and fossil fuel use will result in huge improvements of environment and life in cities and their surroundings.

CabiBUS was on show in the

Public transportation systems today have many limitations and problems that make it less attractive for the majority of travelers. Even in a country like Sweden, with well developed public transport systems, people choose their private car for more than 80% of the daily trips resulting in traffic congestions, pollution and accidents. The major issues are:

- The distance from the starting point to the nearest bus/tram stop and from the last stop to the end destination, in most cases by walking..

- Often it is necessary to change to another bus/tram, adding waiting time and weather exposure.

- Sharing a limited space with other passengers reduce the possibility to work or relax and entails exposure to airborne infections.

- Total travel time is typically much longer than by private car, in Sweden the average is 68% longer

With these obstacles the authorities in cities and regions have real problems to reach their goals for reduced traffic and pollution.  Electric drive is the key to sustainable transport.

CabiBUS is a compact, self-driving (autonomous Level 4,5), electric minibus with 3 doors on each side for a total of 6 passengers (+ rear cabin bookable for wheelchair passenger, baby stroller or luggage). It's  more convenient, safe, reliable and sustainable than any other means of local and regional travel. It's also suitable for children and persons with disabilities. CabiBUS can be produced in vastly larger volumes than buses and trams, which provides economies of scale and low cost per seat. It's truly the game changer in public transportation that can replace a substantial part of the private car traffic.

Taxi services with autonomous cars are now being developed by some of the largest companies in the world: Google Waymo, GM, Uber, DIDI and others have announced plans to launch such services before 2023. A RoboTaxi trip will have a higher cost for a single passenger than a CabiBUS trip.

Many researchers are warning for increased traffic congestions when anyone can take a low cost direct trip alone in a robotaxi so politicians will probably have to find ways to give shared travelling priority in cities.

CabiBUS may offer faster trips than RoboTaxis where it is allowed to use public transportation lanes but may be the preferred service if several persons want to travel together from one place to another. 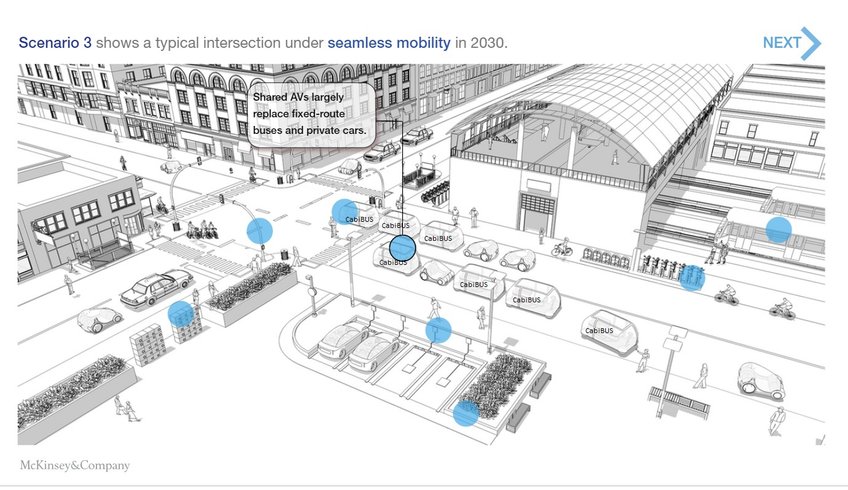 The text "Shared AVs largely replace fixed-route buses and private cars" was later removed from the Scenario 3. Why?

The Boston Consulting Group, Robo-Taxis and the New Mobility

Good morning. It’s 6:30 a.m. and time to get ready for work. You, representing an ever-growing share of the world’s population, live in a megacity—in your case New York, though it could easily be Shanghai, Paris, or any number of other huge cities. Between you and your office stand several miles of bumper-to-bumper highway traffic, so you reluctantly roll out of the house and into your car at 7:15 sharp, hoping to arrive at the office by 9:00.

Now imagine an alternative. Last night, you arranged for a taxi to show up at your door at 7:45 this morning, knowing as you do that the trip will take less time than it would if you were to drive yourself. Soon after you get in the car, it picks up another passenger going in the same direction, who sits in a separate, private compartment. There are no commuter train schedules to worry about, no parking hassles, and no need to weave through the rush-hour crowds in town. Better yet, your taxi ride is cheaper per mile than the cost of driving yourself. And you won’t have to tip your driver. The car drives itself.

The key to new mobility

CabiBUS enables cities to move toward a model of on-demand mobility in which citizens can take advantage of clean transportation options that meet their immediate needs. CabiBUS with one passenger compartment (cabin) for each passenger is a truly innovative vehicle. It is the prerequisite for a public transportation solution that provides safe and comfortable privacy and more unique advantages against existing systems. 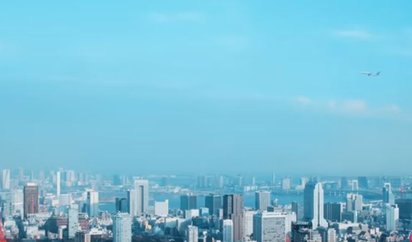 Investment plan for 25 billion SEK (US$2.8 billion) in public transportation until 2035 was decided in 2018.
If the region choose CabiBUS it can be fastest and largest transformation from fossil fuel private cars to shared sustainable mobility. 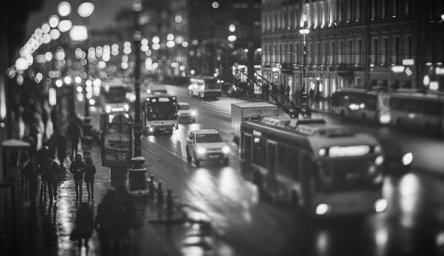 A very good illustration of the CabiBUS system but with one BIG difference: The low-cost Nissan-DeNA taxi service model will bring a devastating increase of traffic in cities.

Real ride-sharing, that replaces most of the taxis and private cars, is the only way forward to reduced traffic and fossil free mobility.

And to make ride-sharing in driverless vehicles so safe and comfortable that it attracts all types of passengers, individual cabins, as in CabiBUS, is the solution. 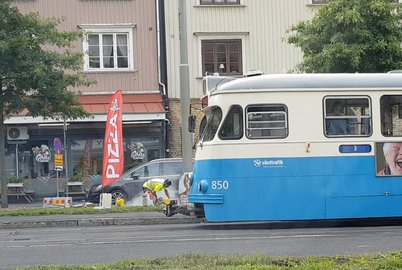 CabiBUS with one passenger compartment (cabin) for each passenger is a truly innovative vehicle. It is the prerequisite for an attractive public transportation solution that offers privacy when sharing a vehicle with unknown passengers in a small vehicle without a driver. It also provides other unique advantages against existing systems.