CabiBUS was on show in the

CabiBUS enables cities to move toward a model of on-demand mobility in which citizens can take advantage of clean transportation options that meet their immediate needs.

CabiBUS is not intended to replace the large buses and trams but rather provide a new service that can attract a majority of private car users.

CabiBUS is made to be:

than current public transportation options so that it can replace a large part of the private cars on streets and roads.

Background
Public transportation systems today have many limitations and problems that make it less attractive for the majority of private car users. Even in a country like Sweden, with well developed public transport systems, people choose their private car for more than 80% of the daily trips resulting in traffic congestions, pollution and accidents. The major issues are:

With these obstacles the authorities in cities and regions have real problems to reach their goals for reduced traffic. Now the development of autonomous electric vehicles can revolutionize the public transport systems through substantially lower operating cost, increased passenger safety and a higher customer satisfaction.

The idea of shared door-to-door service have been with Kenneth Palmestål since the early 70-ties. He proposed the idea of shared door-to-door with minibuses, DATATAXI, in objection to the planned PRT on rails in his hometown Gothenburg in Sweden. In 2010, noticing the development of electric and self-driving vehicle technology he modified the ideas and added private cabins that will offer more privacy, comfort and efficiency that in the end will attract private car commuters. 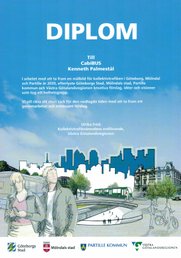 A professional start up team will be formed following the initial financing.

Contacts with the companies on the "wish list" to investigate suitable technology partners.

Building a Mobility Service Provider concept defining the specifications for the vehicle, cabins and the system infrastucture modules.

Kenneth Palmestål is the founder and project leader for CabiBUS. Kenneth has a background as IT professional, entrepreneur and inventor.

His first patented solution, IQtherm, entered the market in 1991 and is a digital thermostat programmable with a remote controller that saves 15-25 % energy in homes and offices (Popular Science March 1991). IQtherm was awarded first prize in a NUTEK technology procurement 1996 and a Swedish Best in Test in 2002. Development of self learning termostats, 15 years ahead of NEST, could not continue due to lack of funding.

The invention SoundRacer is a fun gadget that, when plugged in your car, will produce one of several exciting engine sounds (sent to your car stereo via FM transmitter) that follows and matches your engine's RPM in real time. So now everyone can drive a virtual sportscar! The model X now comes with 7 professionally recorded engine sounds included: Shelby Mustang V8, Lamborghini V10, Lexus LFA V10, Ferrari V12, Porsche 911 GT3, Harley-Davidson V-Twin and Suzuki GSX, and as a bonus the SAAB SPORT (GranTurismo 850 in USA) two-stroke 850cc engine from 1963 (Kenneths first car). Sold globally since 2009. Loz Blain at Gizmag (now New Atlas) made a great video!

The SoundRacer technology was further developed as a sound system for electric vehicles and is used in electric buses, cars, scooters,  motorcycles, karts, fork lifts and other vehicles. Six manufacturers of electric buses and trucks are now among the customers for the Acoustic Vehicle Alerting System, AVAS.    EVSoundSystem.